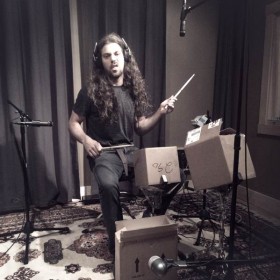 The drums on all the Led Zepplin records don’t have a huge sound.

But regardless, I got some splainin’ to do. Keep reading.

John Bonham is one of the top few drummers that people are consistently making reference to when they step into the studio and begin describing what they want the drums to sound like.

Bonham is the drummer’s drummer. And his accomplice in the Led Zepplin drum sound, Glyn Johns, is the producer’s producer.

In other words, everyone wants to make their drums sound this huge.

So if you read my recent post about the Glynn Johns Three Mic Setup, you might have gotten really excited about the possibility of recording a huge drum sound while only using three microphones.

Except maybe you tried it and it didn’t sound so huge… What happened?

Before your frustration robs you of your creative flow, let’s discuss some critiques of the Glyn Johns’ method-specifically:

Some folks have criticized the Glyn Johns technique, because they think it’s too funky/experimental/advanced, has too many phase problems, and that unless you are Glyn Johns – and recording John Bonham himself – you won’t be able to achieve this famous sound.

But with only three microphones to worry about, this microphone technique is anything but complicated.

And phase issues shouldn’t be a hard problem to solve either. If something does end up sounding a bit out of phase, just tweak the position of one of the overheads.

Wait, what’s phase? Phase has to do with how long it takes sound waves to reach one microphone in relation to another microphone.

Basically, this means that when mics are positioned carelessly, it could make your recordings sound bad.

The topic of phase can get pretty heavy on the tech-talk, but here’s a recent post I wrote to explain it a little bit:

The Secret To Super Punchy, Present, And Warm Recordings

Now, moving on to address the suggestion that the Glyn Johns approach is funky and experimental…

I guess you could consider this method of recording drums funky if you’re referring to the fact that one of the “overhead” microphones is off to the side of the kit.

But creating art is an experiment. Nonetheless, with this being a proven way to record drums by some of the most successful recordists in history, I don’t consider this technique “experimental”.

The results are in. The drums sound killer. Moving on.

Next, the argument that you have to actually be a particular person to achieve a certain sound.

If that’s the formula for making great music, then we should all just give up now. Cause I don’t know about you, but last time I checked I wasn’t Roy Thomas Baker…

…but I’ve certainly used some ideas inspired by him with very happy results. Did the project turn out sounding exactly like Queen? No. But that’s not the point.

The point is to get inspiration from others, and infuse that into your own interpretation of art. We’ve already had John Bonham. We need you to be you.

***Yep! Don’t worry! I’m working towards my explanation of the Bonham drums not being huge. Just keep reading***

So how do you get bombastic, John Bonham sounding drums?

Achieving the drum sound you’re after starts way before you set up any microphones. If you are going for a huge and bombastic drum sound, but can’t seem to nail it, here’s some reasons why you might be having trouble:

The drums aren’t tuned for that kind of sound
Drum tuning certainly plays a role in how they will sound once recorded. If you want your drums to sound bombastic on your recording, tune them to emphasize this character with distinct ringing decay and resonance.

Check out a post I wrote about tuning your drums, which will help you dial this in.

You’re recording in a dead space
If you want your drums to sound live, you need to record the drums in a room that is live-a room that has as many hard and reflective surfaces as possible. A good example would be a basement or a garage with cement and/or stone surfaces.

Another aspect of the Glyn Johns technique that has been criticized is that it’s not possible to get the huge John Bonham sound unless you record in a top notch studio with a top notch live room.

My main recording space used to be a barn out in the country. I got a variety of killer drum sounds that myself and my clients were very happy with.

Most of the time recording happens in far less than perfect spaces. Check out the magazine Tape Op to see what I mean.

Hell, even the famous Headley Grange, where Zepplin recorded so many of their records, wasn’t a traditional recording studio.

Here’s another reason you might not be achieving the big sound you’re after:

The drummer’s style is not bombastic
Yes, the drummer’s musicianship is a very big factor in how the recording is going to turn out. But no, this does not mean you have to actually BE a specific person to get the sound you want.

When recording with only three microphones, it does put a lot of emphasis on the performance of the parts. If you’re looking to have a particular nuance of the drums stand out or blend in more, many times you’re going to need the drummer to be mindful of that in the way they perform the part.

And here’s one last and most strikingly obvious reason that your drums might not sound as big as the drums on a Led Zepplin recording:

My crazy claim that the drums on Led Zepplin records aren’t huge.

We all remember the drums being huge and bombastic on the Zepplin records. I’m guilty, myself, of hyping up the Bonham drum sound as being “monumental.”

But in reality they just weren’t that huge-most of the time. Yeah, they were punchy, present, loud, and powerful. But unless you’re referring to Zepplin songs like “Misty Mountain Hop”, “When The Levee Breaks”, “D’yer Mak’er”, or “The Ocean,” Bonham’s drums weren’t the huge and ambient drums that we have all regarded them to be over the years.

So what about these specific songs, then? Clearly there are some Zepplin songs that do have HUGE drums. How did Glyn, Bonzo, and the rest of the boys get these mammoth drums?

They recorded in bigger and more ambient spaces. Like the stairwell at the previously mentioned Headley Grange house. And/or they used room mics.

Which brings me to the last, and probably most effective, way that you can achieve huge, bombastic, and ambient drums using the Glynn Johns drum miking technique…

Try placing a single microphone about 8 to 12 feet directly out in front of the kit, and about 5 or 6 feet high.

Obviously, this will complicate the setup a bit, because you will now be dealing with four mics. This is one of the reasons I didn’t suggest this in my original post about this mic setup.

But it is the easiest way to achieve a more ambient drum sound that is a little closer to what we remember the drums sounding like on all the Led Zepplin records.