Warning: "continue" targeting switch is equivalent to "break". Did you mean to use "continue 2"? in /nfs/c02/h01/mnt/29682/domains/jonstinson.com/html/wordpress/wp-content/plugins/gravityforms/common.php on line 2846
 Why Recording Live Is The Best Way To Record Your Music — Jon Stinson 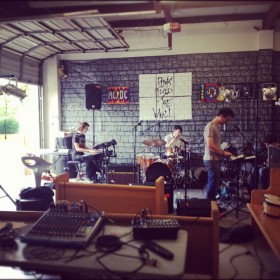 Recording on laptops has become a routine affair. It’s accessible and ideas can be hashed out on impulse. The typical approach is to program and record one part at a time.

I think this is a very resourceful way to record, and I often use this exact approach when working on new ideas alone in the studio.

Even so, programming and layering up parts one at a time on a mobile rig should generally be a means to make a solid work tape or demo to use as reference for what will ultimately be the master recording.

There’s a couple primary weak points in relying completely on “laptop recording” when aiming to make a master studio recording. One is that performances can become a bit lifeless and bland, as consequence of having too many key parts programmed. The other is that the recording process can end up taking significantly longer to complete. Since no one is offering any collaborative input throughout the creative process, you can become stuck in indecision, with endless ideas and endless tweaks.

Why Recording Live Is The Best Way To Record Your Music

The focus becomes the performance of the song
When recording live with your band, you have to function as a cohesive team and tap into a similar mindset that you would when performing a show. This creates a special energy that becomes embodied in the recording and enhances your band’s characteristic sound and identity. The whole thing ends up sounding more authentic and organic, and small nuances are brought out that make the recording more unique. Perfection within imperfection.

When you get a take you like, you practically have the whole recording process finished
Depending on what degree of raw and unprocessed versus slick and polished you want to sound, when you get your basic tracks down in a live recording scenario, you’ve pretty much got a finished recording. Maybe you want to spend a little more time on the lead vocal, or add a few more parts such as background vocals or extra guitar parts, but otherwise you’re ready to send the project over to the mix engineer.

It’s fun and exciting to record live
Music really does take on a life of it’s own when performed live, and songs that are recorded this way take on special qualities that make them unique. When recording your music with your band live it’s an energizing process that quickly takes shape. It’s a real team effort. This process forms a bonding process, and the excitement infuses each member’s individual personality into the recording. The result is something that sounds exclusively “you” through sounds, musical feelings, and happy accidents that you didn’t necessarily anticipate when you wrote the song. A truly artistic maneuver.

Recording live is definitely not the only way to make a great record. There are certain recording projects where recording live isn’t stylistically appropriate. A couple years back I wrote and recorded a bunch of music for an iPhone game. In being consistent with the theme of the game it really made the most sense to program a bunch of synths to sound as computerized as possible (but even still I incorporated some subtle human characteristics into a few of the parts).

Making music is an art form, and how you record it plays a part in how you want your art to be presented. There are countless styles and variables in this pursuit, but keeping your focus on capturing a unified performance is a fairly consistent quality to stay mindful of no matter what style you’re after. For most bands that play indie rock, the fastest and most rewarding way to record is by going into the studio and tracking your project live.